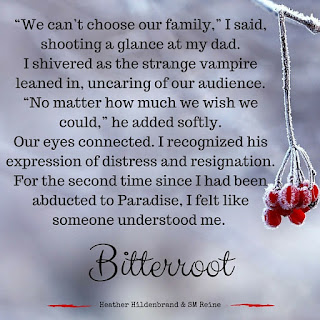 Seventeen year-old Regan Vuk has lived her whole life under the shadow of her future: the pack alpha. She is fast, smart, and determined. According to her own pack members, she is a shoo-in. But Regan’s dad has a secret.

Seventeen year-old Charlie spent her adolescence drifting from place to place with a mother desperate to hide her illegitimate daughter from the unforgiving reality of werewolf pack dynamics. All Charlie has ever wanted is to know her father--and the family that's been kept from her all these years. But most of all, she wants a place to belong in the world. Where she doesn’t have to pretend she can’t sprout fur and paws at will. Being kidnapped on her way home from prom was not she Charlie had in mind.

When Charlie finds out the only way to fit in with her new family is to defeat her long-lost sister for the role of alpha, she refuses. That is until she learns that the strange and alluring vampire she's befriended, Owen, is the same vampire prince that's been promised the winner.

Regan has no doubt that, although she loathes the vampires, it will be her who "wins" Owen.

Only problem: Charlie's already fallen for him.

Bitterroot is a Young Adult Paranormal with a dose of sibling rivalry... Who will you root for?

Share the following message on Twitter, FB, or IG OR follow me on any of these platforms and get entered to win a signed swag pack including a paperback of Seasons of the Moon by SM Reine & Dirty Blood by ME! Contest ends 9/26!*


*Contest not affiliated with FB, IG, Twitter, or any other outside entity. Must be 13 years or older. Void where prohibited.

I was immediately drawn into the story and although it is a fast read it definitely is not lacking. The characters were very well developed in the small expanse of time in which this serial takes place and I really enjoyed the alternating points of view from both sisters, Charlie and Regan. Since they have never met I liked getting to kind of feel out their personalities as they do the same with each other. I always enjoy werewolf and vampire stories but with so many out there it's always a nice surprise when one has a unique aspect that you haven't came across before. Such is the case with Bitterroot. Never have I read a book where the female werewolves lead and are the alpha. I definitely liked that! That also helped build the tension between the sisters who are somehow supposed to build a bond while having to compete for alpha. Wow! Of course I'm a sucker for romance especially the forbidden kind and am absolutely antsy to see what happens next between Charlie and Owen. With the sparks between them practically flying off the pages what will happen if Charlie doesn't win?!! What if she does?!! Oh my goodness I need the next book already! Luckily I was assured that part 2 will be out very soon, closely followed by part 3 and I will get to find out. I highly recommend Bitteroot to fans of young adult paranormal romance and all my werewolf/vampire lovers out there. ;-)

** I received a copy of Bitterroot in exchange for my honest review **
at 8:02 AM