Get ready to fall in love with the mountain men of Fallen Peak. These five men are all determined to be alone until the women that they're meant to be with find their way past their defenses. Grab a blanket and curl up as we head up the mountain to Fallen Peak! Rory: It all started six months ago when I accidentally emailed the wrong person.   From the first email, I was addicted.   Over the last six months, we’ve formed a connection. We became friends, sharing everything. From there, we became best friends, but now I’m hoping that, maybe, we could be something more.   Our emails have gone from nervous banter to fun to flirty, so it only made sense to me that we should take our relationship to the next level and finally meet each other in person.     Rhodes: I was hooked on Rory from the very first email.   I've only fallen for her more in the last six months but I know that there's no way that she could love me. Not with my hulking size and the scars that run down the left side of my face and body.   When she shows up on my doorstep, I'm shocked.   Not because she looks like a curvy goddess, but because she doesn't seem disgusted by my appearance.   When Valentine's Day is over, will I be able to let her go back home?

Get Your Copy Today! He’s my kidnapper… and my protector?   Magnolia:   It all started three months ago. That was when my restraining order was finally approved.   Unfortunately, it hasn’t stopped my stalker from following me from one town to the next.   Then I make a stop in Fallen Peak and my situation seems to go from bad to worse.   Graham:   I don’t know what drew me to the curvy blonde bombshell, but one look and I knew that she was meant to be mine.   When I clock the hooded figure following her, I react and kidnap her before they can hurt her.   Now I’ve got to convince my dream girl that she can trust me to keep her safe while unraveling the mystery of who is really after her.   Will Graham be able to slay Magnolia’s monsters this Halloween and convince her that she belongs with him? He’s the man of her dreams, but she’s not who he thinks she is…   Myra:   It all started two weeks ago. I needed to leave town, but I had nowhere to go.   That’s when I stumbled on my roommate’s dating profile and saw the sweet messages some guy sent her. He invited her to come visit him and left his address.   So, I may have stolen her account and messaged him back that I was on my way.   It was only meant to be a few days, but once I meet Alder, I don’t want to let him go.   Alder:   When Myra shows up on my doorstep claiming to be the girl that I’ve been messaging online, I know that she’s lying but I don’t have it in me to turn the curvy girl away.   So instead, I invite her in and try to see how far she’s willing to go with all of this.   Then something happens.   I start to fall for the lonely little liar.   Will Alder be able to let Myra go? Or will he have something special to be thankful for this Thanksgiving? What happens when your pretend husband happens to be the man of your dreams? Tilly:   It all started ten months ago. I had just gotten to Fallen Peak and met my new boss.   Ledger Miles.   He’d be the man of her dreams if he wasn’t such a jerk.   When the accident happens and she’s called to the hospital, she’s shocked to learn that Ledger doesn’t remember his life.   In fact, the only thing he is sure of, is that they’re married.   Ledger:   When Tilly first got to town, I knew that she was going to mess everything up.   I never wanted to settle down but ever since she’s got to town, I can’t stop thinking about what wedding ring would look best on her finger or how good her curvy figure would look if she was pregnant with my baby.   Maybe that’s why I assume she’s my wife when I first wake up in the hospital.   After a few days, my memories come back but I can’t seem to get the words out to admit that to Tilly.   Will Ledger be able to get the present that he wants this Christmas? A surprise pregnancy. A second chance to realize how right they are together.   Snow:   It all started five weeks ago. That’s when I had a one night stand with the hottest lumberjack that I’ve ever seen.   I thought that it would be fine. I would finally do something crazy before I settled into my boring life as an accountant.   Then I miss my period and all three pregnancy tests come back positive.   I’m kind of freaking out and I have no idea what to do next. The only thing that I do know, is that I need to track down that lumberjack and let him know that he’s about to a daddy.   Wells:   When Snow shows up on his doorstep, he can’t wait to get her out of his house and his town. He knows that he can’t be in a relationship so maybe he’s a little harsh with her as he escorts her back to her car. He just doesn’t want to waste anymore of her time.   Then she tells him that she’s pregnant with his baby and everything changes.   Wells’ New Year’s resolution this year is to convince Snow to give him a second chance, but will he be able to make that come true?

Shaw Hart is an Amazon Top 100 best-selling author of contemporary and New Adult romance. She loves writing instalove romances that always end in happily ever afters. She lives in a constant state of motion, chasing after her two children and three dogs. Shaw enjoys the simple things in life, like spending time with her family and friends. When she’s not doing that, she’s reading romance books, watching stand up comedies or crime TV shows. Her favorite book tropes are secret baby and boss/employee romances. She’s a big fan of James Acaster, Anthony Jeselnik, Nate Bargatze, and John Mulaney’s comedy. Her favorite TV shows are Psych, Burn Notice, Leverage, Barry, Bob’s Burgers, and New Girl. She’s a Pinterest addict, dog lover, tea snob, and a wannabe yogi. She also writes contemporary romance books under the pen name, Rebecca Wilder, and she’s one half of the paranormal romance duo, Skye Alder. 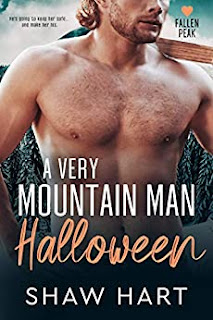 If you enjoy strong protective men and steamy scenes with a side of Halloween, then this is the book for you.
Magnolia is being followed by an ex boss's son that just won't take no for an answer. The restraining order means nothing to him. Luckily Graham notices her stalker and kidnaps her first. It's crazy how she instantly feels safe with him. They have great chemistry and I love how he's determined to keep her safe and also make her his own. Definitely a hot read, but has some cute moments as well. Although it's book two of the series it can easily be read as a standalone, but after reading this one I think I want to read them rest of them as well. I'm sure you will too! 😉
Happy Halloween 🎃👻🧛‍♀️
at 12:29 PM