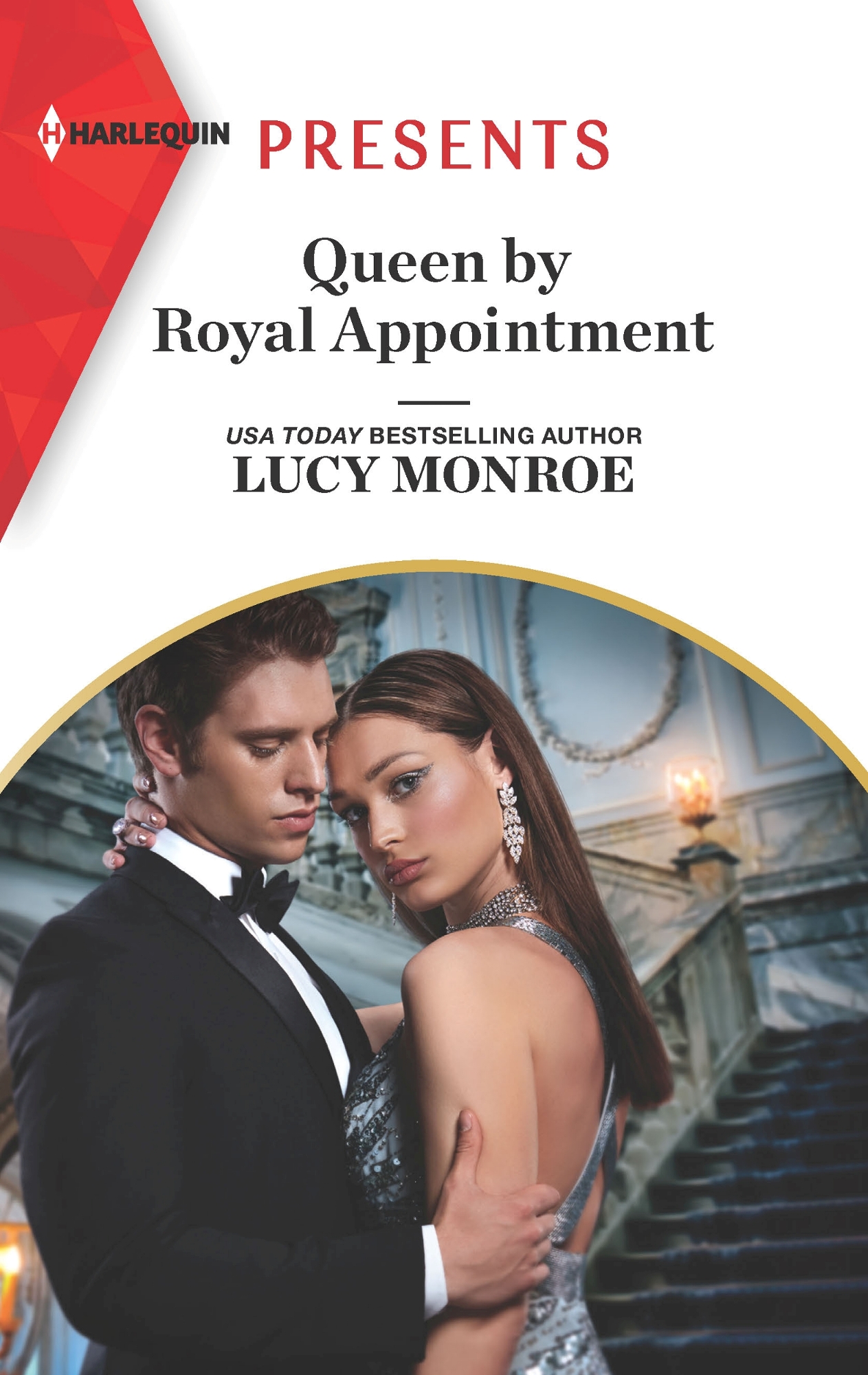 Queen by Royal Appointment is a riveting fast read. I have never read a book pertaining to royals, but was instantly intrigued. Nataliya is obligated to a contract of marriage to a prince, but she does not see him as fit for her to marry. Which I loved! I mean who is brave enough to say nope this PRINCE is not worthy of marriage to me?!!! I automatically liked her for that, as well as the fact that she presents herself with dignity and strength. She would not let the royal family push her around! Nikolai wanting to fulfill the marriage contract instead of his brother makes things very interesting. Especially considering Nataliya had a huge crush on him as a teen. I don't want to reveal much more and spoil the story, but I will say that I definitely like the way Nikolai respects Nataliya and think that he is super romantic, although he doesn't seem to believe so. His past makes his stake in the relationship very telling. I am really glad about the way things work out for them. They have great chemistry and a great respect for each other which is just as important. I loved Queen by Royal Appointment and think I will have to try more romances about royals if they are all this good!
at 2:50 PM No comments:

Today is the cover reveal for Stealing Infinity and I just can't get over how gorgeous it is. Isn't it stunning? 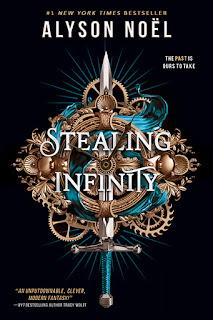 When a young girl with an usual gift is whisked away to an academy for time-travelling teens, she becomes the target for a sinister organization hell-bent on rewriting history in this clever and fast-paced YA that is guaranteed to become your next fantasy romance obsession. 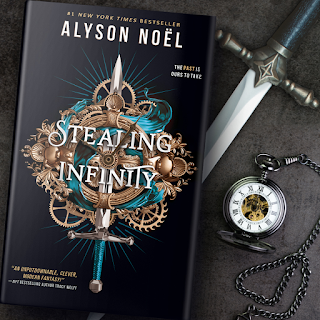 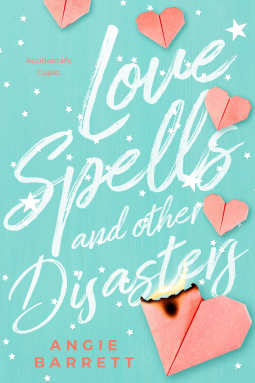 Review: To Whatever End 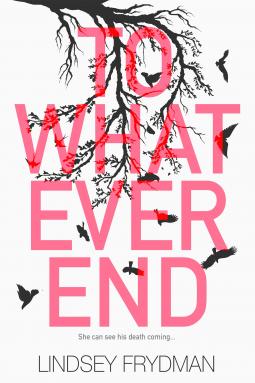 What if with every person you met, after just one touch, you have a vision of the last time you’ll see each other? Ever. Normally, these visions are innocent—two friends just drifting apart, a random stranger that brushed past you then never crossed your path again.But not today.When I accidentally touch him, within only moments of our first meeting, I’m bombarded by visions of his death.And from what I can see, I’m the reason he dies.Now I just need to figure out why, and how to stop this from happening. Because not only am I to blame, but his very last words to me are...I love you

Review: They Wish They Were Us 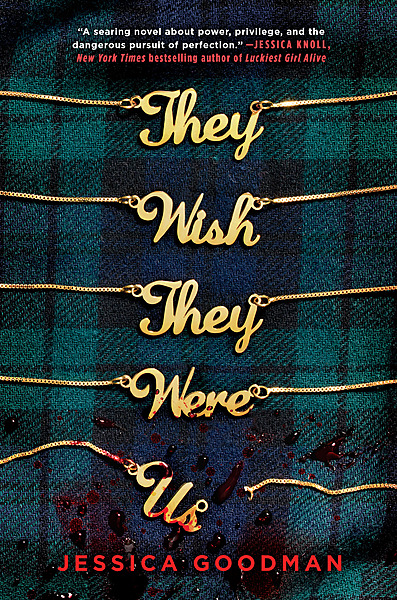 Book description: Gossip Girl meets One of Us Is Lying in this slick, taut murder mystery set against the backdrop of an exclusive prep school on Long Island.

In Gold Coast, Long Island, everything from the expensive downtown shops to the manicured beaches, to the pressed uniforms of Jill Newman and her friends, looks perfect. But as Jill found out three years ago, nothing is as it seems.

Freshman year Jill's best friend, the brilliant, dazzling Shaila Arnold, was killed by her boyfriend. After that dark night on the beach, Graham confessed, the case was closed, and Jill tried to move on.

Now, it's Jill's senior year and she's determined to make it her best yet. After all, she's a senior and a Player--a member of Gold Coast Prep's exclusive, not-so-secret secret society. Senior Players have the best parties, highest grades and the admiration of the entire school. This is going to be Jill's year. She's sure of it.

But when Jill starts getting texts proclaiming Graham's innocence, her dreams of the perfect senior year start to crumble. If Graham didn't kill Shaila, who did? Jill vows to find out, but digging deeper could mean putting her friendships, and her future, in jeopardy.

They Wish They Were Us is enthralling and captivating from the start and I just couldn't put it down. I love YA mystery thrillers like this and really wish there were more of them out there. I find it interesting that the crime has already taken place and that we are then presented with the idea that the person convicted of it may not have actually done it. So then you're wondering well who did. On top of that the whole Players thing is pretty intriguing and seems to really shine a spotlight on peer pressure and naive youth. It touches on a lot of issues including bullying, sexism, ethics, and more. I think the author did a good job at planting little seeds about a few characters and while some have said they knew right away who did it, I'll admit that I did not. I did realize it shortly before it was revealed, but I still had fun getting there and getting the satisfaction of being right when it finally was presented without a doubt. I think it was a great choice and I thoroughly enjoyed reading They Wish They Were Us.

I received this book through bookishfirst and this is my honest and voluntary review. 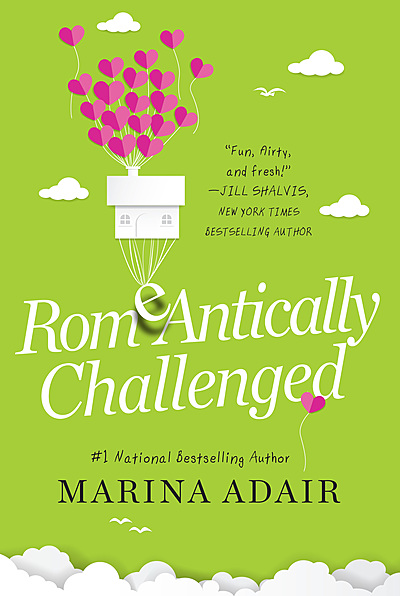 Growing up the lone Asian in a community of WASPs, Annie has always felt out of place. Her solution? Start a family of her own. Not easy when every man she’s dated, including her ex-fiancée, finds “his person” right after breaking up with Annie. Even worse than canceling the wedding eight weeks beforehand? Learning the “other woman” plans to walk down the aisle wearing her wedding gown. New plan—find a fresh, man-free start. Too bad her exit strategy unexpectedly lands her working at a hospital in Rome, Rhode Island, rather than Rome, Italy, and sharing a cabin with a big, brooding, and annoyingly hot male roommate.

Home on medical leave after covering a literally explosive story in China, investigative photojournalist Emmitt embarks on his most important assignment—cementing his place in his daughter’s life. Three men and a baby might work in the movies, but with a stepdad and devoted uncle competing for Paisley’s attention, Emmitt has lost his place at the family table. Then there’s the adorably sexy squatter in his cabin, who poses another problem, one he’d very much like to solve up close and personal. But he can’t win—Annie has sworn off men, Paisley’s gone boy crazy, and Emmitt’s estranged father reappears with a secret that changes everything.

Annie and Emmitt are about to discover love comes in many forms, and sometimes the best families are the ones we make.

I love enemies to lovers stories and after reading the firstlook I really thought this book would be the perfect romcom read. Unfortunately the story seemed to drag for me. I mean everything seemed fine in theory, but the execution of it just left me bored! I had to keep forcing myself to read to get through this one and even had to take breaks to read other books to try to refresh. No matter how optimistic I would be going back into the story, it just never hit home with me. It also really annoyed me that Emmitt knew and even talked about how Anh hates being called Annie and only does it to make other people happy, YET he turns around and calls her Annie over half of the time himself. I mean seriously, why? I hate that I didn't like this one more. It had great potential.

** I received this book through bookishfirst and this is my honest and voluntary review. ** About the Book
Tempest Wright has become a local celebrity with the tough love advice she dishes out on her popular radio show in the small western town of Bandits Hollow. She’s got all the answers for kicking two-timing husbands, freeloaders, and other losers to the curb. That is, until her son’s unruly Angus nearly gets him thrown out of 4-H. Not even Tempest’s shock jock one-liners can get through to this little bull, and what she needs most is an expert cowboy to put the animal through his paces. Little does she know that handsome steer wrestler Dixon Ramsey has a few sexy and surprising paces of his own. And with a bit of magical help from Granny Tinker, Dixon shows Tempest a whole new world where love is real on the range, second chances are worth fighting for, and only the toughest cowboys survive–because they know how to stay.

Rambling Star Ranch is a fun and captivating romance with just the right touch of magical realism. Tempest is a strong yet vulnerable woman and a wonderful mother. Exactly the type of character I love to read about! She has been hurt in her past and basically made a job out of protecting others from the same fate. She's built the walls around her heart so tall and strong she's even earned the nickname Tempest the Terminator. Don't let her fool you though. I knew right away when she met Dixon (a.k.a. accidentally groped his chest lol) that she was going to fall head over heels for the handsome cowboy. He's definitely a charmer and I loved how he cared for not only her, but also her son. Dixon is confident, handsome, a gentleman, and a cowboy... How could she possibly resist?!! Their chemistry is great and their easy banter kept a smile on my face. The entire setting of the story with the fair and the competition is just such fun and I was completely immersed in the story. The magical realism is always part of the wonderful charm from this author and I love that she included my favorite mystical character Granny Tinker. It just wouldn't be the same without her meddling! So if you're like me and handsome cowboys, witty banter, mischievous old ladies, and a bit of magic are your thing then this book is for you!

** I received a copy of this book from the author. This is my honest and voluntary review. **