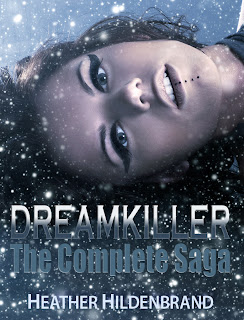 ~Chapter One~ This wasn’t going to be easy. Marlena squared her shoulders. She’d have to do it anyway. There was no time now. She looked up through the glass ceiling at the moon one last time. It was fading from red to white with each passing second. It had to happen now or not at all. With superhuman strength and speed, she leaped from her hiding place high above the crowd and dropped to her feet. She weaved quickly in and out until her targets were within reach. She was careful to keep her hood pulled down until she reached the far end of the plaza. No one gave her a second look, including the two men she shadowed. Years of training had given Marlena the ability to blend into a crowd. Humans often only noticed the blatantly obvious. The shorter of the two men spoke quietly to the valet and handed him a ticket. Then he rejoined his friend at the curb as the valet wandered off. When the men were alone, she made her move. She had exactly thirty seconds until the valet brought their car around. She sprang forward, snapping their necks so quickly that the second one didn’t even have time to scream before it was his turn to die. When she was done, she faded back into the shadows, her mission complete. ***
-- Heather Hildenbrand Author of the Dirty Blood series --
View all my titles at: www.heatherhildenbrand.blogspot.com


Here are the links to buy at  Amazon  or barnesandnoble