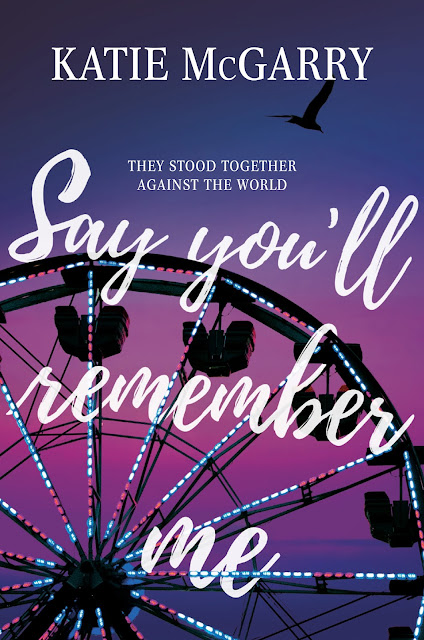 "Doesn't matter who did it. Not anymore. I did the time. It's over."

When Drix was convicted of a crime--one he didn't commit--he thought his life was over. But opportunity came with the Second Chance Program, the governor's newest pet project to get delinquents off the streets, rehabilitated and back into society. Drix knows this is his chance to get his life back on track, even if it means being paraded in front of reporters for a while.

Elle knows she lives a life of privilege. As the governor's daughter, she can open doors with her name alone. But the expectations and pressure to be someone she isn't may be too much to handle. She wants to follow her own path, whatever that means.

When Drix and Elle meet, their connection is immediate, but so are their problems. Drix is not the type of boy Elle's parents have in mind for her, and Elle is not the kind of girl who can understand Drix's messy life.

But sometimes love can breach all barriers.

Fighting against a society that can't imagine them together, Drix and Elle must push themselves--Drix to confront the truth of the robbery, and Elle to assert her independence--and each other to finally get what they deserve.

Say You'll Remember Me is captivating and heartfelt.  It was at turns sweet, beautiful, and uplifting, as well as sad and emotional. I loved how the story still felt like a lovely romance while also dealing with some tougher issues such as self-discovery, injustice, and family problems, that really gave the story depth. Drix and Elle are from completely different backgrounds but it's really wonderful how they find what they need in each other and I knew from the moment that they met that they had amazing chemistry together. The themes of self-discovery for both characters is a nice way of showing that we all have more in common than we think. Although Drix did not commit the crime he was sentenced for, he was not on such a great path before all of this. I loved that the program helped to bring out his good qualities and made him reevaluate his actions. Elle on the other hand is battling between her sense of family loyalty and doing the things that truly make her happy. She's always played the part of the governor's perfect daughter yet somehow has always felt like she was never good enough for her parents no matter how hard she tried. Elle helps Drix to see the good in himself while he helps her to realize that she is enough exactly the way she is. The back and forth between Elle and Drix's points of view was a nice way to get the story from both of their perspectives and really get to know both characters. I really enjoyed Say You'll Remember Me and cannot wait to read more by Katie McGarry. I definitely believe YA contemporary romance fans will love this one as much as I did!

** I received an advanced digital copy of this book for my honest review. ** 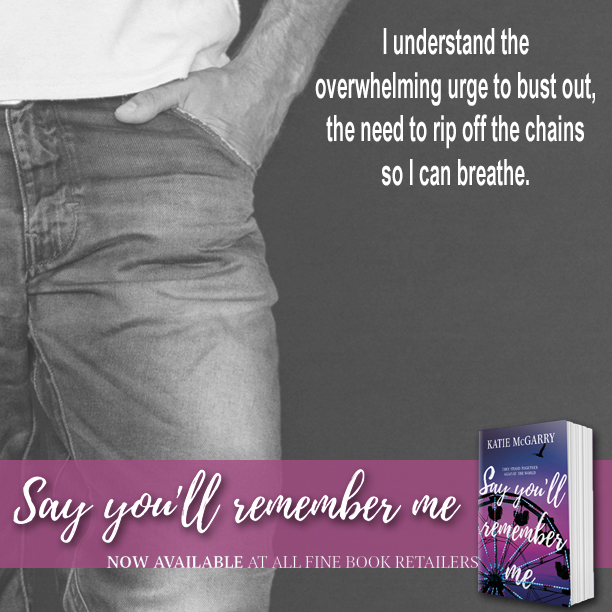 Add it to your Goodreads Now! 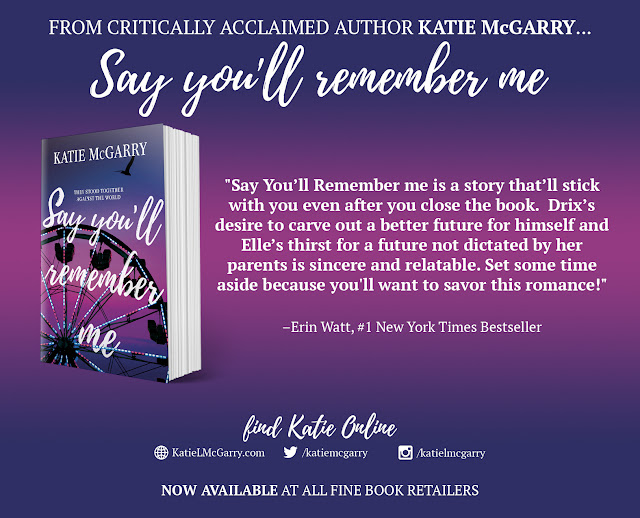 ~Ellison~
The two of us are different. Complete sliding scale different. The only thing we have in common, as far as I can tell, is that he appears about my age and that we are both wearing shoes. My sandals to his scuffed combat boots. His sagging jeans with rips and white T-shirt to my ironed khaki shorts and fitted blue top. My diamond earrings and gold bracelet with a heart charm to his black belt that has metal studs and silver chain that hangs from his belt loop to his wallet.
By looks, I should have more in common with the loser college boys, but it’s this guy I’m comfortable with. “What’s your name?”
He throws the ball, and he’s right, he sucks at it. While he has unbelievable power, his aim’s completely off. The ball hits the back curtain with a loud thud, then drops to the floor. “Drix.”
“Drix?” I repeat to make sure I heard him correctly.
“Drix. It’s short for Hendrix. Like Jimi Hendrix.”
“That’s cool.” Because it is.
I wait for him to ask for my name, but he doesn’t. Instead he says, “Are you here alone?”
He throws the second ball, and this time he hits the top of the three bottles, sending that one to the ground.
“No. My parents are here. I’m supposed to meet them at the convention center. What about you? What happened to the people you were with? Or are you here alone now?”
“Yes, but no.” Drix pulls his arm back, releases the ball, and when the ball hits the bottom bottles, my heart lifts with the idea that he won, but only one of the bottles goes flying. The other stays completely untouched.
He turns in my direction, but his gaze roams over my shoulder, then flickers to the left. Drix then glances behind him, and when he returns his attention to me he raises his eyebrows. “They appear to be gone.”
That’s awesome news, but I’m still stuck on his answer of “yes but no.” Honestly, I’m stuck on him. He’s a million questions without a single answer, and he makes me incredibly curious.
“My parents weren’t thrilled about me hanging out alone at the midway, but I didn’t think it would be that big of a deal. It’s just Whack-A-Mole, you know?”
“And a ball toss.”
“And a ball toss. None of it should have been complicated.”
“Shouldn’t have been.”
“Elle!” Part of me is relieved to see Andrew craning his neck over the crowd. Another part of me is majorly disappointed. There aren’t many times in my life I’m left alone. Not many times I’m able to explore new places and people without someone hovering and not many opportunities when I would meet someone like Drix.
“Elle,” Andrew calls again. I wave at him, hoping it will buy me a few seconds, and he waves back in a way that tells me he needs me to walk in his direction. That works well for me.
“Is that a friend of yours?” Drix asks.
“Yes, but no.” I borrow his answer because it’s apropos. Andrew’s a few years older. More friend of our family than a personal friend of mine, and I don’t like the idea of explaining that my parents think I need a babysitter.
Drix’s mouth twitches at my words, and my lips also edge upwards. “I just made you smile a third time. Is this a Guinness Book of World Records thing?”
“I liked your answer.”
“I’m just creative like that.” 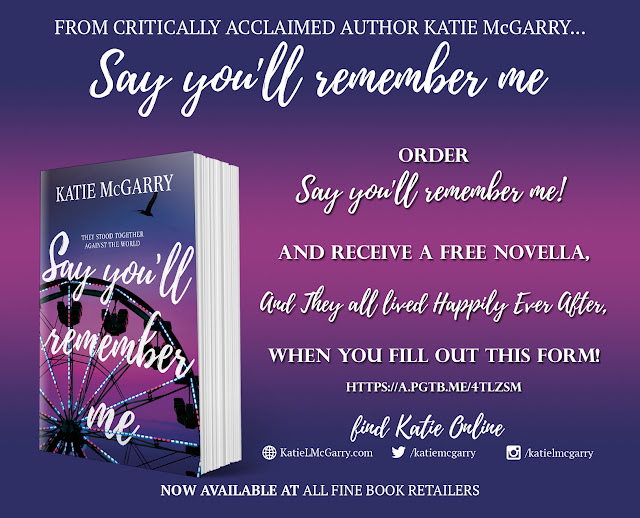 Order SAY YOU'LL REMEMBER ME, register and you will receive AND THEY ALL LIVED HAPPILY EVER AFTER, a novella that features your favorite Pushing the Limits and Thunder Road characters!
From the Pushing the Limits series, Noah, Beth, Isaiah, West and Logan are all grown up. Catch up with your favorite characters as one of them finally says, I do.
Pigpen, Eli and Addison from the Thunder Road series: Three separate personalities who still needed to find love...and still had someone important to meet.
This is a limited time offer! So hurry! Registration ends on February 3, 2018! You must register your order to receive AND THEY ALL LIVED HAPPILY EVER AFTER.
https://a.pgtb.me/4tLZSM 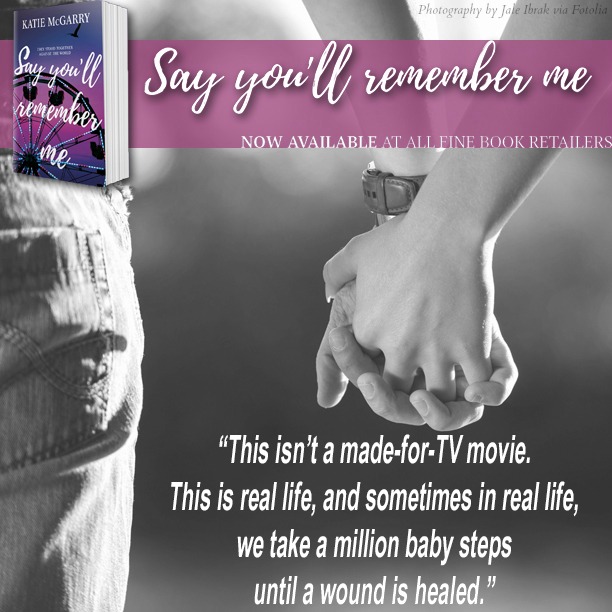 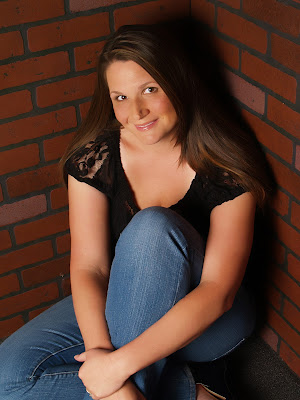 About Katie McGarry: Katie McGarry was a teenager during the age of grunge and boy bands and remembers those years as the best and worst of her life. She is a lover of music, happy endings, reality television, and is a secret University of Kentucky basketball fan. Katie is the author of full length YA novels, PUSHING THE LIMITS, DARE YOU TO, CRASH INTO YOU, TAKE ME ON, BREAKING THE RULES, and NOWHERE BUT HERE and the e-novellas, CROSSING THE LINE and RED AT NIGHT. Her debut YA novel, PUSHING THE LIMITS was a 2012 Goodreads Choice Finalist for YA Fiction, a RT Magazine’s 2012 Reviewer’s Choice Awards Nominee for Young Adult Contemporary Novel, a double Rita Finalist, and a 2013 YALSA Top Ten Teen Pick. DARE YOU TO was also a Goodreads Choice Finalist for YA Fiction and won RT Magazine’s Reviewer’s Choice Best Book Award for Young Adult Contemporary fiction in 2013. 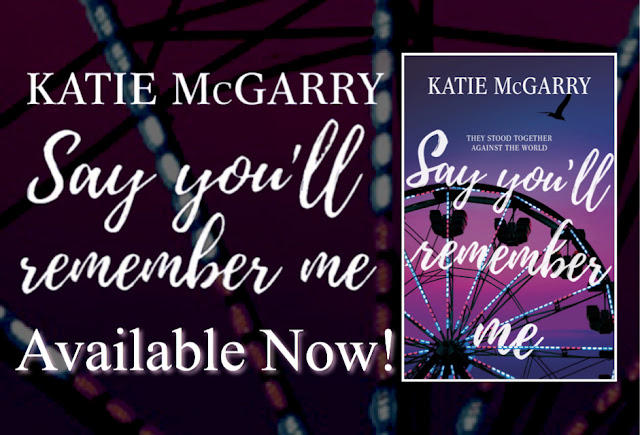