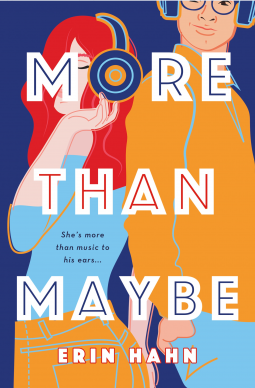 ABOUT MORE THAN MAYBE:
Growing up under his punk rocker dad’s spotlight, eighteen-year-old Luke Greenly knows fame and wants nothing to do with it. His real love isn’t in front of a crowd, it’s on the page. Hiding his gift and secretly hoarding songs in his bedroom at night, he prefers the anonymous comfort of the locally popular podcast he co-hosts with his outgoing and meddling, far-too-jealousy-inspiringly-happy-with-his-long-term-boyfriend twin brother, Cullen. But that’s not Luke’s only secret. He also has a major un-requited crush on music blogger, Vada Carsewell. Vada’s got a five year plan: secure a job at the Loud Lizard to learn from local legend (and her mom’s boyfriend) Phil Josephs (check), take over Phil’s music blog (double check), get accepted into Berkeley’s prestigious music journalism program (check, check, check), manage Ann Arbor’s summer concert series and secure a Rolling Stoneinternship. Luke Greenly is most definitely NOT on the list. So what if his self-deprecating charm and out of this world music knowledge makes her dizzy? Or his brother just released a bootleg recording of Luke singing about some mystery girl on their podcast and she really, really wishes it was her? In More Than Maybe, Erin Hahn’s swooniest book yet, Luke and Vada must decide how deep their feelings run and what it would mean to give love a try. 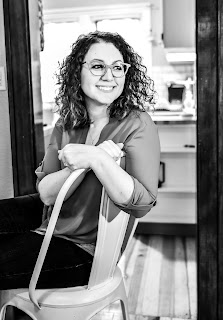 ERIN HAHN is the author of You'd Be Mine and More Than Maybe. She teaches elementary, would rather be outside and makes a lot of playlists. So many playlists in fact, that she decided to write books to match them! She married her very own YA love interest who she met on her first day of college and has two kids who are much, much cooler than she ever was at their age. She lives in Ann Arbor, Michigan, aka the greenest place on earth and has a cat named Gus who plays fetch and a dog named June who doesn’t.

Excerpt from More Than Maybe by Erin Hahn. Copyright 2020 by the author and reprinted by permission of Wednesday Books.

I slip my phone back in my pocket, and the door opens again, causing my heart to flip-flop in my chest. Luke Greenly walks in, looking wet and harried and straight from my nerdiest daydreams, carrying his longboard under his arm and a cardboard coffee cup in his hand. Luke and Cullen aren’t identical twins. Cullen is tall and wiry with dark hair. Luke’s broad shouldered and fair with longish pale blond hair, currently plastered to his forehead despite the hoodie under his black leather jacket. He’s also got light gray-blue eyes behind bold black frames, contrasting his twin’s un-spectacled dark brown ones. Yet somehow, when they’re together, they look the same. They move in a similar way. And, yeah, their accents are yummy.
(I would never, ever admit it, but I play their podcast recordings before bed. Luke’s voice is extra soothing. Deep, lyrical, and crisp.)
The owner of those golden vocals approaches, and I duck, prodding at my nearly empty cup in an effort to hide my flaming cheeks. The Loud Lizard is my territory, and I am cool and calm and not at all flustered by Luke Greenly. We’ve spoken exactly nine times since Christmas and I’m, regrettably, still nervous around him. Also, I’m still counting. So, that’s . . . annoying.
“Hey-hey, Vada.” Luke clears his throat.
“Thought we wouldn’t see you tonight. Didn’t you have plans?” Cullen asks.
“I did, yeah. But Kazi didn’t show.” Thank God Kazi is reliably unreliable. No need to mention my Marcus drama to the Greenly twins.
“Shocking,” Cullen says drolly.
“Yeah, so I’m here. For a little longer anyway.” “Well,” says Cullen, wrapping an arm around my shoulders. The music dies down as the band wraps up their set. Unless it’s a special occasion, our live music usually ends early on Sundays, which is convenient for the Greenlys. The sound booth isn’t exactly soundproof in this place. “D’you need a ride home?”
I shake my head and lean into him. “Nah, I brought my mom’s car since I planned to meet my dad. Wanted a quick getaway.” That part’s true anyway.
Luke’s full lips twist in a half grin, and he removes his frames to give them a swipe on the dry edge of his hoodie.
I pull out the keys Phil left me and lead Luke and Cullen down a dark hallway, away from the noise of glasses clinking and instruments being loaded up. I unlock the sound booth and flick on a light.
“All yours, boys.”
Cullen leans down and smacks a kiss on my cheek. “Thanks, doll.”
I don’t know the Greenly twins super well, but Cullen is definitely the outgoing one. He’s also very, very gay. He’s been with his boyfriend, Zack, for so long they won homecoming kings this past fall by a landslide. Maybe that’s why I can talk to him so easily. Or maybe that’s just Cullen. His superpower is making people comfortable.
But it’s rare for me to see Luke without headphones or even hear his voice in person. I give him my best smile, but he only nods shyly as they pass. I inwardly sigh, all lust and longing and whatever else alliterative pining I can come up with. You know it’s bad when I’m the social one. I wait for them to get hunkered down at the mics before I close the door with a soft click behind me.
Back on the floor, I fill another cup with cherries and settle in to people watch. We have the modern equivalent to a jukebox in the corner that can be fed off debit cards, and someone’s clearly coming off a bad break because a second loop of Demi Lovato’s “Sorry Not Sorry” has started. I skim the club for the culprit. My money’s on the black-haired beauty with Cover Girl’s Matte #5 stained on her one, two, three straws. “Get it, girl,” I mumble under my breath. Demi is a perfectly respectable breakup diva. See also: Sam Smith and Ray LaMontagne.
The door flings open with a gust of icy air, and Kazi appears in his pale, full-on dread-headed glory. I glance at my watch. Ohhhhh, he’s late. Or, later. Phil’s not gonna be happy.
I pass the keys to Kazi with a bored scowl. “You get to wake up Phil,” I say. He winces, and I don’t bother to hide my smile. “Also, he was expecting you half an hour ago, so.”
Grabbing my jacket from behind the bar and feeling for my keys, I wave goodbye to Ben and head out into the night. My breath huffs out in front of me. I unlock my door with a beep and immediately lock it behind me, turning on the heater and heated seats full blast and letting the ringing in my ears from an afternoon spent in a noisy club dissipate.
But I don’t like the silence. What I want is to walk back into the bar and perch on a stool and listen to breakup songs and banter with Cullen and let Phil preach at me. I want to help Ben pour drinks, cast dirty looks at Kazi, and wait for the moment Luke leaves and see if I can’t earn one last shy smile from him. I want to stay here. I want to delay the moment when I have to face my hurt feelings—or worse, my mom’s hurt feelings, because even after all this time, Marcus is still breaking two hearts with one drunken accusation.
After a minute, I release a slow breath and reluctantly pull my seat belt across my lap, backing out of my space to drive home. My real home, and not just the place that feels like it.