Review: The Evaporation of Sofi Snow 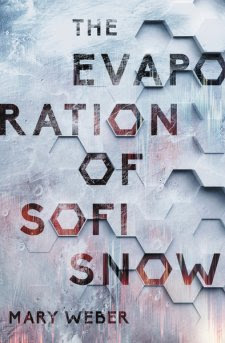 For fans of Ender’s Game and Blade Runner comes a story of video gaming, blood, and power.
Ever since the Delonese ice-planet arrived eleven years ago, Sofi’s dreams have been vivid. Alien. In a system where Earth’s corporations rule in place of governments and the humanoid race orbiting the moon are allies, her only constant has been her younger brother, Shilo. As an online gamer, Sofi battles behind the scenes of Earth’s Fantasy Fighting arena where Shilo is forced to compete in a mix of real and virtual blood sport. But when a bomb takes out a quarter of the arena, Sofi’s the only one who believes Shilo survived. She has dreams of him. And she’s convinced he’s been taken to the ice-planet.
Except no one but ambassadors are allowed there.
For Miguel—Earth’s charming young playboy—the games are of a different sort. As Ambassador to the Delonese, his career has been built on trading secrets and seduction. Until the Fantasy Fight’s bomb goes off. Now the tables have turned and he’s a target for blackmail. The game is simple: Help the blackmailers, or lose more than anyone can fathom, or Earth can afford.
From the award-winning author of the Storm Siren Trilogy, step into a diverse cast of characters spanning from the electric metropolises of earth to the chilling alien planet above, in a story of re-finding yourself in the midst of losing the one thing you love. Before it all evaporates.

The Evaporation of Sofi Snow was a pretty interesting read. It has a cool gamer/sci-fi/futuristic feel that I really enjoyed. I liked the world building, but wish there would have been a little more of it. I liked the main characters, Sofi and Miguel. I was hoping for more romance between them but I think things seemed to be heading that way for the next book. So fingers crossed I get to see more then. I feel like there were also a lot of secrets and hidden agendas that left me not quite knowing what to make of some of the characters though. Hopefully that will all come to light soon. I felt like it took a little bit to really get into the story but once I did I was totally captivated. I think that may be because it was setting a lot of things up to happen in the next book, so there was a lot of escalation toward the end when things were starting to get really juicy. This book does end with a major cliffhanger that has me pretty anxious to read the next one! I would recommend this book to fans of YA gamer/sci-fi novels that are light on the romance.

**  The publisher has provided me with a complimentary copy of this book through BookLook Bloggers.  **